Tilias are mostly present in the Sylian Realm and the Feriah Union. They originate from Althea, the capital planet of what is now known as the Sylian Realm, and thrive in its peaking landscapes, between the high and steep rocks, towering over the ocean surface and freshwater lagoons.

On Athea, tiny land ridges are surrounded by massive cliffs, covered in corals. Many of them form hidden marshes, preserved from the salted water tides, where life could develop. 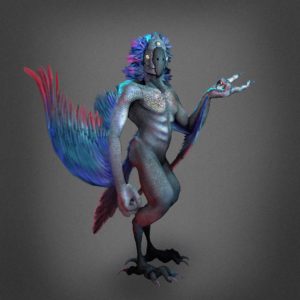 Tilias, an orni-species that used to live atop the cliffs had no natural enemies, and their uncontrolled population growth gradually led to the available livable space shrinking and eventually, collapsing, which resulted in a total war. The conflict decimated nearly half of the Tilia population, but within centuries, the environment was overwhelmed once more.

Raw strength therefore had to give way to techniques, and careful planning to expand the livable surface, which laid the ground for the future terraforming capabilities of the Realm. Wisdom, creativity and craftsmanship became the most valuable skills of the species, the stronger ones pledging their services to the most cunning.

Lordships and counties spread all across Althea, as Tilias began constructing platform-based sky cities, supported by massive columns. But their species population growth remained a problem, as Tilia architects could not keep up with the thirst for living space. Therefore, major decisions were taken by the most powerful lords: Births had to be controlled and a new environment needed to be explored. That is how the species turned to the vast oceans of Althea, where, this time, they intended to build floating cities.

While building these new cities, they encountered the Salix, the other intelligent species of the planet. Long years of war followed, as the Tilia had unknowingly threatened the livelihood of these underwater creatures by blocking out the sunlight from reaching the underwater corals, which the Salix relied on for their nourishment and reproduction.

The technologically advanced Salix have proven to be an unstoppable force for the Tilia, but showed little interest in expanding their living space to the surface world. Peace was eventually concluded between the two species, who first collaborated to build sustainable cities, above and below the water line. At a later stage, combining the two technological schools of thought, they have reached out for the stars and joined the space race.

To this day, space stations of the Sylian Realm, encompassing both Tilias and Salix still combine underwater blocks and steep housing design, as a legacy from their homeworld planet.