Salix are mostly present in the Sylian Realm and the Feriah Union. They are an amphibious species originating from Althea, the capital planet of what is now known as the Sylian Realm. They thrive below the surface of the planet’s deep, salt water oceans and are known to have telepathic abilities. 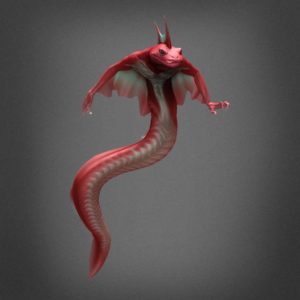 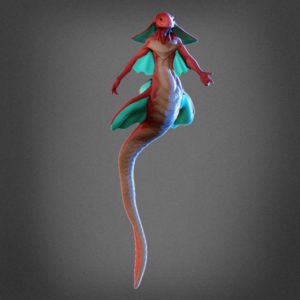 The planet is streaked with land ridges surrounded by massive, towering cliffs, covered in corals. The ocean tides have dug out numerous caves underneath the cliffs, both above and below the water line. Endless underground galleries connect the caves, forming a network of pathways that only the Salix can fully explore, as they can breathe through air and water.

Living in small groups or as nomads under miniature protective domes underwater, Salix moved from one place to another, feeding themselves off phosphorescent seaweed and deep-water plankton. The constant ingestion of phosphorus gave Salix their characteristic glow on their fins, as these grew out of a transparent membrane. Luminous as the corals on Althea, the Salix could camouflage themselves in any coral-rich environment.

The oceanic saltwater sometimes blended with freshwater from lagoons and marshes drained from the ridges on the surface, in the hidden lakes underneath the cliffs. Reaching these lakes became a rite of initiation for Salix, who could sometimes watch the starry nights they could not see otherwise, as they avoided the ocean surface, where large marine predators – the natural enemies of Salix – used to hunt. The starry skies visible from the hidden lakes were considered a distant paradise by Salix, as they imagined a constellation of gigantic phosphorescent corals far away, in the depths of the cosmos.

Salix have always prioritized escape over fight, where the predators hunted. However, when an unknown species from the surface began constructing floating cities, obstructing the sunlight from reaching under water, and tearing out corals from the cliffs, the Salix panicked. Fearing for their food supply, the balance of resources, and the preservation of the phosphorescent coral, they ventured to the surface, first as scouts.

The technology of the unknown species, now known as  Tilias was inferior to that of Salix. However, they were superior in numbers, had far more combat training and stronger morale. Salix therefore had no other choice but to combine their technological advantage with their knowledge of the terrain, to prevent the unexpected invasion. They used guerrilla tactics to lure the enemy from the surface into the complex underwater galleries, where they could defeat them easily.

When Tilias came under attack from this unexpected enemy, they responded with force, launching assaults on Salix underwater settlements, but many have also lost their lives in Salix ambushes.

Finally, aided by the telepathic abilities of Salix, negotiations took place between the representatives of both species. Peace was achieved between Tilia and Salix, who later collaborated to build sustainable cities, above and below the water line, growing reinforced coral as a light source and a food source for Salix.

Salix, who used to live in the depths as nomads, have joined the lordship structure of the Tilias, and their sedentary way of life, although they kept dreaming of exploration. It was a group of Salix scientists who first contemplated space exploration, and a combined research effort by both species have turned this dream into reality within a hundred years.

To this day, space stations of the Sylian Realm, encompassing both Tilias and Salix still combine underwater blocks and steep housing design, as a legacy from their homeworld planet.