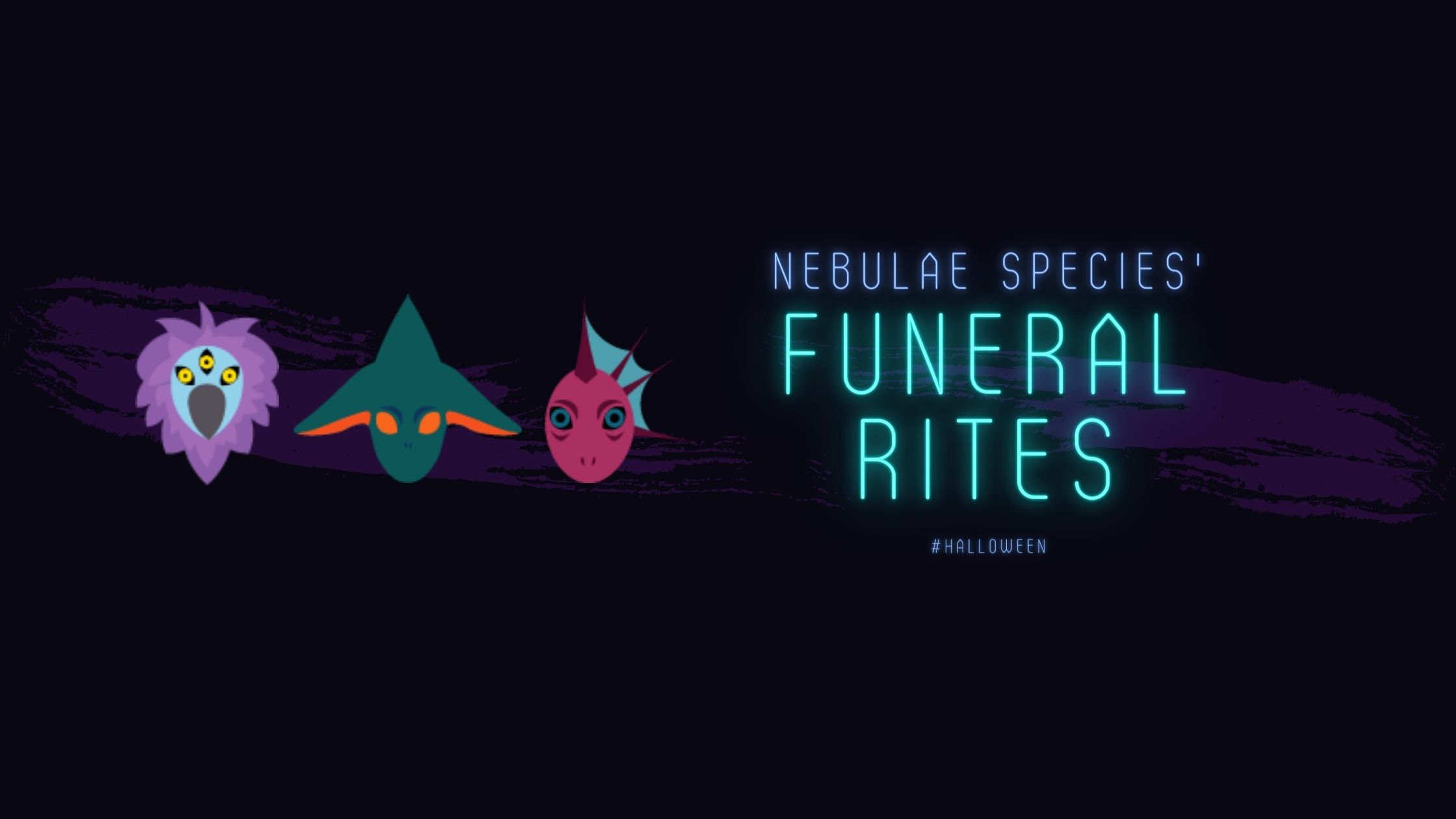 In Nebulae, very diverse intelligent beings have reached the depths of the cosmos. 5 of them will be available at launch : The Vhalrax, The Ga’Borgah, the Gaultherian, the Salix and the Tilia species. Each of them has their very own History & traditions. As part of their traditions, funeral rites are sacred, and diverse depending on the species.

The most traditional way of disposing of a dead Ga’Borgah is to salvage the crystals from the deceased’s head and place them inside a family mausoleum. The rest of the body is then thrown into a pit of lava. From living rocks they return to magma. Those mausoleums are a very big deal in the Ga’Borgah society. If the crystal is not stored inside the right place, the entire family is cursed. A giant and beautiful family tree often decorates the mausoleum’s floor.These mausoleums are closely guarded against the intrusion of strangers or pests, such as Xyadients.

Once one Vhalrax leaves this world, the way the body is disposed of is up to the dead’s will or the relatives’ will. And it is usually pretty unchecked. Some have been buried or cremated, others left to rot in their garden, some families even choose the cannibalistic option. The only restriction is to not get a public place involved in the body disposal method. Death is a very simple concept in Vhalrax’s minds. Dying means joining nature in a feast of harmony and joy. The remains can be simply buried without any fuss below the closest tree as the spirit of the dead one’s is believed to commune with the environment and pleasure itself in the great orgy that is the collective hive mind of trillions of ancient deceased Vhalrax.

The remains of the dead body are placed in a dome-shaped coffin. From then, a process is triggered, absorbing any water from the body, taking as long as a week. During this time, the family organizes the funeral. After the absorption, the body is mummified and buried in cemeteries. However, the collected moisture is stocked inside an urn and given to families. They usually keep close relatives in their houses. The older ones’ urns are used in a final funeral rite: the unification rite. During the unification, the goo inside the urn is used to draw religious symbols and personal life-related drawings in the snow. The more drawings there are, the greater the unification is, and the more Gami enjoys their presence. Dances and chants around the drawings occur, while the spirit joins Gami’s embrace in the sky, across the clouds and the stars.

Salix have very few funeral rites. Remembering the dead relatives isn’t about what remains of them but the remains of what they did. It’s more common to think about a dead relative’s life achievements or creations than visiting a grave or the remains of their body. After a small funeral, in which the life of the Salix is presented, the dead Salix is buried near a coral plantation where their body will rapidly be decomposed and nourish the surroundings. Salix “cemeteries” – even if this concept doesn’t really exist in a Salix’s mind – can easily be mistaken for a very, very old mass grave.

When Tilias were still a young species, up in the mountains, they often looked at the ocean the same way they looked at the sky. It seemed infinite, mysterious and a path to a new life. Perhaps the afterlife. When a Tilia died, a small boat was built for the body and sent into the ocean, off to join the new world that awaited every Tilia that met death. It was furthermore underlined by the fact that every Tilia that went exploring the ocean never came back. They simply died of tiredness or eventually fell into the water and drowned.

During the Great War, so many Tilias died that burning them close to the ocean was much quicker and saved a lot of useful resources. Incineration became very popular and rapidly evolved after the war. When a Tilia came to die, its body was cremated and its ashes were sealed inside a rock or a wooden totem displaying one’s passion, devotion or body. After that, the direct descendant of the dead Tilia had to carve out a terrace on the side of a cliff and position the totem on it, facing the ocean. It is said that once the cliffhanger coral eventually covers the hole, the dead’s spirit is finally released and joins the ocean. A dishonored or a deprived Tilia’s ashes are usually spread in a pond and any water that is not the ocean.

After the Salix-Tilias conflict, mixed species cemetery complexes were erected on oceans’ coast, respecting both funeral rites. Sending bodies to the ocean the old fashioned way is still used today for public figures and important politicians.