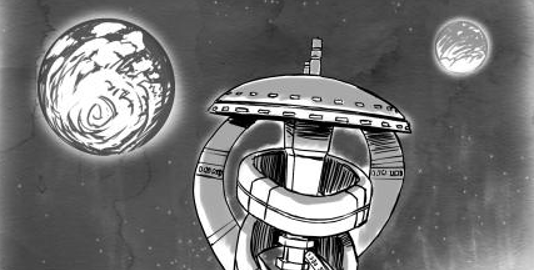 Show me chapter IV: Yet another job

Bal is typing his name on a holo-keyboard. In front of him – a floating projection of an authorization form, the text appearing in a coppery color over an orange background: “Bal Joreck”. Gabhel takes a look at the panel, which the Tilia promptly hides, staring down at his left talon, covered in bloodied bandages.

Time… Bal doesn’t have time anymore. He takes a look at the countdown above his head. It’s glowing at zero since a few hours already meaning he has now failed his delivery run. And lost the merchandise in the process. Getting back on the unforgiving delivery market will be troublesome.

He completes the jump request form and submits it back to the crew supervising the hyperspace portal. It is nearly instantly accepted, and the device’s ambient shimmer intensifies, pulsing in the depths of space..

Short, green electrical arcs form, initially at the edges of the portal, gradually extending inward, as they converge on  Bal’s ship, like a thousand pinches across a rugged fuselage. The rotation of the portal’s acceleration rings, coupled with the perpetual green flashes is nearly blinding. Bal, however, familiar with the process for decades now, types away the coordinates and re-ignites the engines. In a deflagration, the ship disappears, fired away. A tiny, speedy projectile, travelling through darkness, unbound. .

Hours later, the ship exits hyperspace, decelerating. They are far beyond any inhabited star systems – or almost. A shabby station, seemingly held together by rusty bolts and a prayer to long-forgotten deities, appears on the holopad first, and in front of Gabhel’s and Bal’s eyes shortly after –  The “Pink Sun”. Bal initiates the landing sequence, as Gabhel incredulously assesses  the structure. For its unpolished appearance, the place seems to offer many services. Rust and stardust cover every conceivable surface. The only things suggesting the functional state of the facility are red and green lights framing the landing pad and a glowing pink sphere  atop of the station’s command deck. 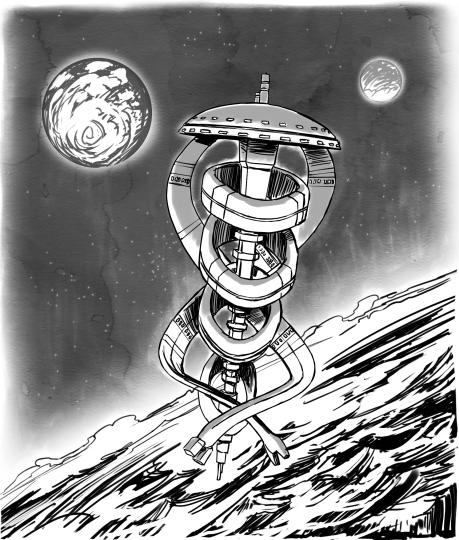 After landing, and while reluctant workers – Vhalrax, no doubt –  are taking care of the ship and its crew, injecting fuel and tinkering away at the hull, Bal, Gabhel and a few passengers others suit up and get out to get provisions for the ship’s significantly expanded crew. Quite naturally, this leads them to the centrepiece of local economic activity – the malodorous, poorly lit bar. A thick smoke fills up the atmosphere from diverse substances being consumed by the few passing customers. Even Bal coughs, as both he and the Gaultherian sit down at the bar – the rest of their company having been dispatched for procurement. .

Bal gazes over the familiar place. This dim bar reminds him of some of the jobs he had, a life he used to live. A breeze of nostalgia blows over Bal’s mind – memories buried deep beneath his conscious self engulf him for a split second.. He suddenly sees another bar, blood splatter all over the walls and the floor … a few years back again and he now sees some drugs on this long lost planet… another Tilia’s face… peacekeepers shouts, tears.

As Bal attempts to suppress laughter and Gabhel’s skin looks like it’s about to start steaming, the Gaultherian eventually gets served and both of them begin silently drinking. A quiet music is cradling them, a musician is playing on a small stage. The music is calm and resting, almost lightening the darkroom. Gabhel timidly approaches Bal.

Bal, surprised, gawks at Gabhel, who is staring back at him. Their glassy, fish eyes seem devoid of any emotions. Bal measures the Gaultherian from head to toe, in his new, but damaged uniform. The envoy, still carrying their energy gun.

“Is Gabhel simply a Royal fanatic?” Bal thinks. There are fanatics in the Union, after all, so why not in the Realm? The bartender, suspicious and tense, looks up. “Shoot” doesn’t seem to be their favourite word..

Sensing the tension toward them, Gabhel mutters: “Hum.. hum… that was humor.”

An awkward silence settles in the room, for a moment – the bartender reaching below for something out of everyone’s sight, Gabhel smiling, but sweating nervously in his stool, and Bal – raising his eyebrows in disapproval, with his keen, yet tired eyes examining the envoy once again.

Bal nonchalantly pulls in the syntheol bottle and pours himself another measure. – “Your sense of humor, I mean.”

For a time this night, Bal’s wounded talon wouldn’t be in as much pain, filling his head with memories – different ones, this time. Over the years, Bal’s gotten used to this pleasant side effect of syntheol in improbable companies and circumstances.

The next day, accompanied by the painful sensation of a roaring hangover, Bal, Gabhel and the rest of the crew unsteadily make their way to Bal’s vessel. There were two things that seem certain to them: First – the decision not to repeat last night too soon. Second – the uneasy course they are about to set to their new destination – the Vamira system.