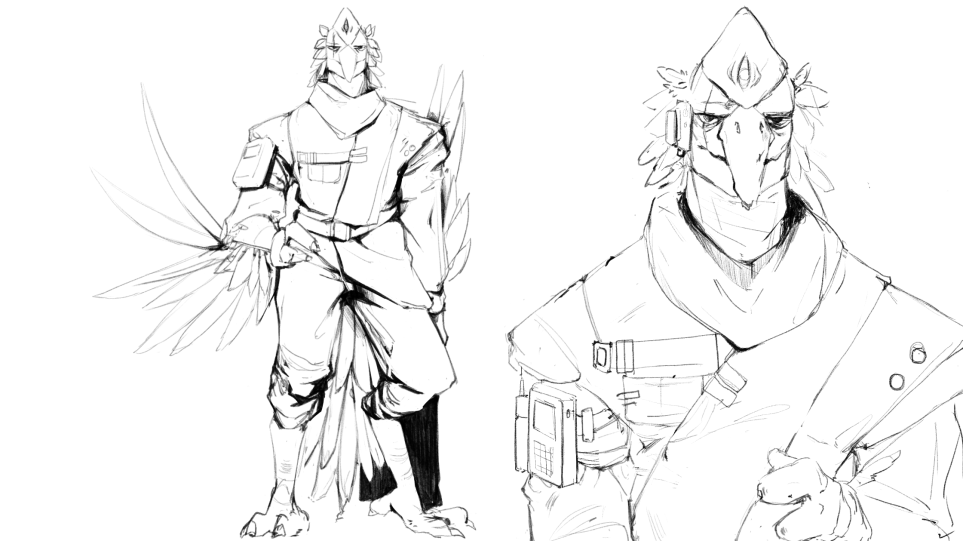 Somewhere near the frontier of the Feriahi Democratic Union, not far from the militarist Zirul Dominion, a single transport vessel quietly travels between overlight jumping portals. The small craft, a medium-sized mining shuttle refitted into a trailer, is towing three large containers, all welded together by a magnetic energy field. Inside the head vessel, Bal Jorek watches his course, half-asleep.

The pilot is an old-looking Tilia. His body, fattened and rusted over years of malnutrition and heavy lifting, bends over the control panel. Distant stars appear to be dancing in front of his three wrinkled eyes. Stardust, rushing all over his cockpit’s spaceship, makes him dizzy. Bal loses the grip over the controls and falls asleep – his feathers gently stretching in accordance with his loud respiration; his heavy and bulky beak resonating from his snoring.

The ship slowly deviates from its programmed trajectory – something the onboard flight system detects immediately and proceeds to correct. A powerful alarm is triggered inside the vessel, effectively waking up Bal. First surprised and confused, he then turns on the holo-transmitter and sets it on a music channel. A heavy and loud song blasts from the speakers, as musicians hover above the holopad. Bal rolls his three eyes in a cringe… If only this ship wasn’t such an old and broken mess, he could turn the volume down… He glances at the hologram…

This band is famous around the Dominion for its politically engaged lyrics, often militaristic. Even their chords sound like a stereotypical Zirul citizen. Rude, arrogant, and fighting to be heard over anything (or anyone) else. The main musician, a gigantic Ga’Borgah, is using his four arms to play a heavy and complex instrument circling around him. He is quaking the entire scene, as well as his Valhraxians bandmates, shaken down to their chitin.

Bal reflects that such a horrible song may force him to stay awake. Once again, he loses his gaze in the emptiness of space, as he sinks back into his seat. Out of boredom and deep fatigue, he scratches his arm’s old wings which haven’t been used in years.

A notification light starts blinking below the holopad, and Bal’s feathers twitch in curiosity. That’s a public channel reception, someone close enough to him is trying to get in touch. Eager to escape the monotony of his journey, he swiftly hovers his finger onto the channel switch. The musicians disappear, leaving room for a prerecorded message. A Gaultherian head slowly materializes over the holopad. With three different species appearing one after the other, watching the holopad begins to feel like an upper galaxy’s biodiversity documentary…

“… and I.. I am in great danger!”. The screeching of the holo-transmitter’s speakers is unbearable. “I don’t know who those people are, but they are obviously targeting me. I am hiding with some officials, but my crew won’t be able to fight them back! We’ve been boarded! I… we need immediate assistance, p..please, s…someone, help us!”

A political envoy of the Sylian Realm, figures Bal, surely under attack by mercenaries. Political disputes and shady plots are getting increasingly common these days, but this is the first time Bal is directly confronted with one of them. He glances at an orange countdown above him. Should it reach zero, he’d be late for the delivery run. His employer, an… impatient…Ga’Borgah, is waiting for him in the Takot system. He can practically visualize picturing the yelling, those frightening teeth, menacingly swinging above his feathers, about to crush him, if he dares to talk back…

Once again, he stares at the Gaulterian’s ungendered head. He even wonders if hermaphrodite species actually have genders. Fear was written all over their damp face. This person was stuttering, crying for help, hoping that someone might hear him in the cosmic void. Bal could even spot some tears flowing down their glassy eyes on the detailed hologram face. “If that’s a trap,” thinks Bal, “This Gaultherian sure is a good actor”. Bal sighs once again. A few seconds pass, cradled by the humming of the ship drive and the terrorized voice of the message, playing on repeat.

Bal cuts the power. In a deafening sound of primidium parts dislocating and transmissions bending, as engines heavily cough before they come to a halt. The ship drifts forward in a spin. Saving this Gaultherian would only bring him trouble; he’d also be late with his delivery and he’d have to deal with armed people, their number unknown. This is a suicidal move. If he leaves right now, nobody would know about this. Bals’ claws reach for his head, he hesitatingly scratches his feathers, when a familiar face suddenly flashes in his mind.

…Back then, he would have loved to see this face cry out for help… Bal would have helped no matter what… But is he the same as before?

He eventually snaps out of his thoughts. He shakes his head and clicks his beak a few times to come to his senses. It’s time to act, and, preferably, avoid dying. He switches the engines back on and opens a control panel to identify the sender’s coordinates. Bal saves his current coordinates and disables the energy field, dropping the three containers free of its attraction. Banging and thudding one another, they eventually halt to a standstill. Bal firmly pulls the control and sets up a new course. He grabs the throttle lever, lightly smirks, then pushes the throttle lever all the way up.

The ship’s entire frame shudders, not being used to the absence of cargo, resonating all the way to Bal’s talon’s on the metallic floor. The vessel immediately bursts into EOC, Engine Overclocking, and rushes to its new destination. Confident, Bal pushes the controls, and nonchalantly reaches to turn off the distress call transmission. However, as his hand slips, he actually forwards it to a second prerecorded message, unveiling an explosion and shooting on the holopad. Bal can make out only some indistinct shouting:

“They are breaking through!”

“Then lock the armored doors and blow up the pellets!” shouts another.

“Hurry please!” sobs the Gaultherian. “B… be advised, enemy fighter vessels are pinning us! Th… they are …”

A final explosion, followed by nothing but darkness. The hologram blips out. Void. Fear. 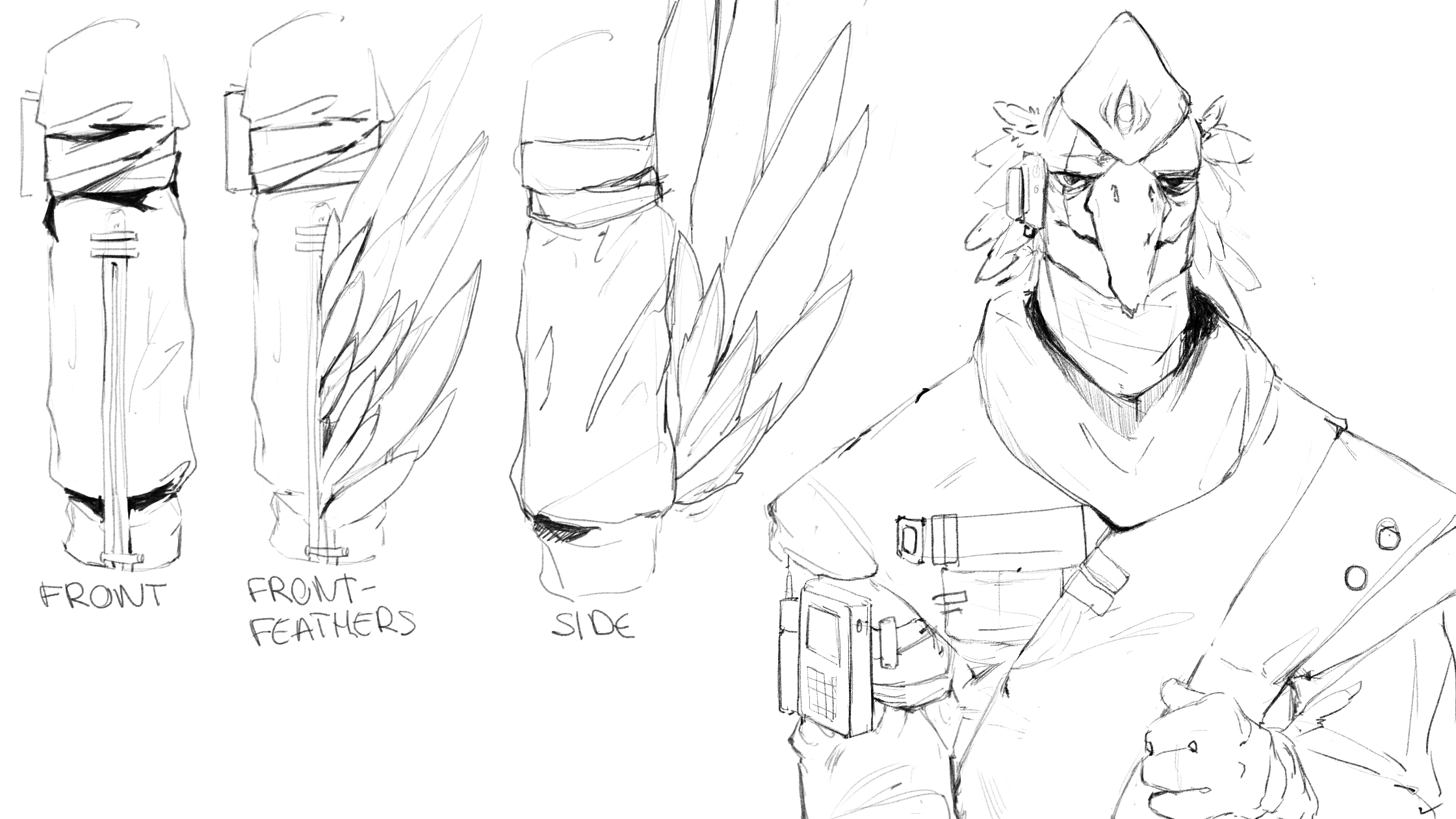