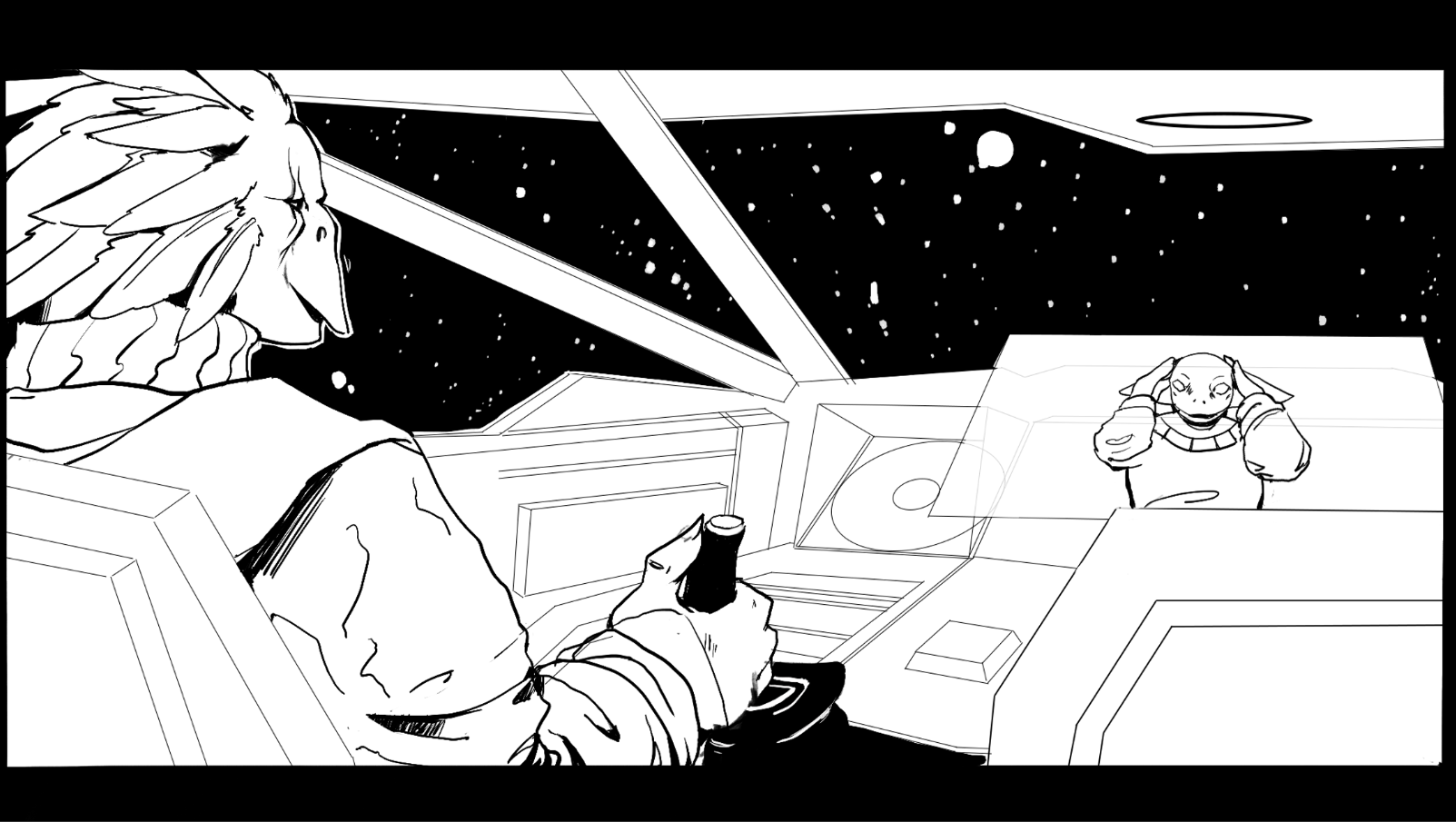 A few thousand kilometers away from the distress call’s origin, Bal slows down. The engines phase out from EOC. The Gaultherian’s transmission is unlikely to be very far from here and he needs to find a way to approach the envoy’s ship quietly. Well, if this ship is still intact, and not just a debris field, by now.

As he struggles to fit into his worn EVA suit up, Bal takes a look through the cockpit and sees his objective on the scanner – a robust cruiser, not so far away, completely still amidst the endless emptiness. He locks his helmet and activates the life support system and feels the oxygen filling up the suit, the pressure levels equalizing Bal deploys the landing gears and then disables the main generator, unpowering the entire ship, including its life support system. Everything dark, with only inertia slowly propelling the vessel toward the cruiser. This way, Bal’s craft will have a chance to stay undetected, or at least, unsuspected.

This spacecraft is a magnificent, Sylian cruiser, with a dark-toned color base adorned with deep blue neon. If it weren’t for the hull breaches all over it, explosions, and the terrorist interceptors boarding it, Bal would have loved to peacefully dock. Minor debris is floating around – surely what remains of other interceptors. There must have been quite a few casualties… Luckily, this trash may cover Bal’s approach as he peacefully glides forward.

The huge metallic panels of the cruiser’s fuselage are now merely a few meters away. Bal swiftly turns the engine back on and quietly lands onto the cruiser. Firstly proud of his feat of stealth, he quickly realized the good fortune he just had. His chest tightens and his eyes widen, as he notices a combat spaceship, tarnished with battle marks, breaking free from its boarding position. It slowly rotates left before disappearing among the stars. Relieved, he cautiously turns his holo-transmitter on. Immediately, a personal call is incoming, which Bal hesitantly proceeds to accept.

“Y..you don’t have the same signal signature as the others,” The broken speakers shout once again while the appearing Gaultherian noticeably murmurs in his communicator. “…Who are you?…”

“I’m… help.” Bal answers, uneasily. The irony of the situation isn’t lost on him: One does not get to rescue the pride of the Sylian navy from aboard a meek tow-ship every day. “I’m docked below your ship and ready to pick you up. Can you evacuate?”

“Negative. W..we can’t reach our EVA suits.” The Gaultherian stops. “However, I… I mean, my crew has a plan. We just need y…you to hold still.” The envoy hesitates for a second, then cuts off the transmission.

In Bal’s head, a dash of frustration rushes through his neural system – the damn envoy could have shared this “plan” with him, at least, instead of letting him sit there like a lame duck, defenseless against armed and likely experienced interceptors. What remains is a foolish hope that the pirates will not notice his out of place vessel. Bal closes his eyes. He’s really getting too old for these shenanigans.

A sudden flash followed by a small shockwave makes Bal duck, as metal particles fly by, with a few hitting the cockpit. Instinctively, Bal fires the engine and firmly grabs the controls, preparing to dart off. However, an awkward, pink, and gooey bubble starts oozing out from the newest addition to the long list of holes in the cruiser’s frame… It reaches the size of a body, then of a small vehicle, until a metallic crafted cylinder is pushed right through. It looks like… an improvised docking port? Bal discreetly takes off and shifts the tow-ship towards the mesmerizing material. As he examines the cylinder’s cover, he notices a burnt-in message:

“DOCK HERE PLEASE. THANK YOU!” Bal shakes his head, but a chuckle escapes from his chest.

A quick manoeuver later, Bal’s ship is aligned with the improvised exit. Life support on. Rumbles, shouts, and footsteps begin echoing through his vessel as the crew evacuates. Bal reaches for his plasma pistol and spins himself toward the cockpit’s entry door. A Gaultherian enters, still the same one as before, but a tad more nervous and significantly more sweaty. He looks younger than on the hologram and has a holstered energy gun. Face to face with Bal, the Gaultherian stops, studies Bal then puts his palms up; Torso’s height. They stare at each other for a few tense moments, a silent argument occurring in Bal’s head.

A new notification blips on the holo-transmitter, silencing the inaudible dispute. Bal rushes to accept it ahead of everyone else and turns off the visual transmission on his side. It may be enemy reinforcements. A voice screeches through the speaker:

“Hey guys, I’m back. I’ve got us more backup than expected and some sweet explosive leftovers. I’m on the way, we still need to breach through some armored doors, right?”

“Shut it, knucklehead!!” Bal slams his fist on the panel. “ Don’t broadcast on the public frequency like this, what are you, hatched yesterday?”

The Gaultherian, who seems to be on the verge of a panic attack, is left speechless. Bal, still looking severe, winks at him, and turns back to the console. The pirate on the other side of this conversation sounds baffled, too.

“Forget it now, son! The target has fled with an escape pod, we’re looking for him in the next sector. Meet you out there, over and out.”

“S…sir, O-kay, sir! I… I’m sorry, sir!” There is some nervous laughter, and then the transmission blips out.

An uneasy feeling settles down between the only two people inside the control room after a feat that would usually result in congratulations. The Gaultehrian cautiously approaches.

“This is impressive…  You’re good at this. Th…thank you.”

“Don’t sweat it, kiddo. We’ll be out of this in no time.” Bal installs himself in the pilot seat, and pulls the controls, pushing switches, and activating mechanisms. The control panel opens. He selects the last saved position and activates EOC. He grabs the thrust lever and glances at the countdown, it’s getting red. He smirks.

“Can’t be late on the delivery, you know.”

Then the ship disappears into the starry sky.