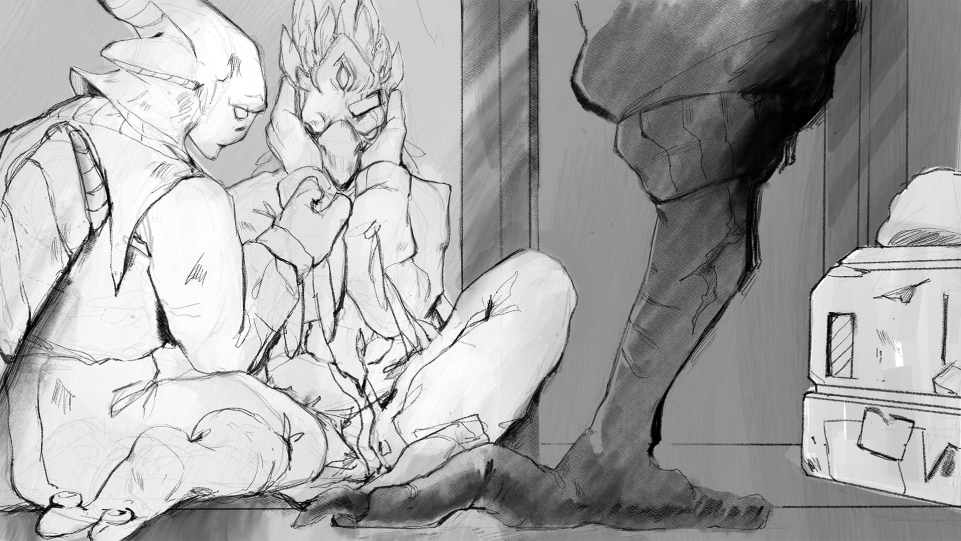 Somewhere near the Feriahi border with the Zirul Dominion, Bal’s shipping spacecraft is fleeing from a battlefield where he has just rescued a Sylian official and their crew. In thirty minutes, the ship will break out from EOC and arrive at the last position stored in the ship’s navigational system: The location of his abandoned merchandise. There is time to spare.

Bal gets up to roam around the ship. As he opens the door of the cockpit, he discovers the official’s crew, now sprawling in the hallways.  A lot of them are injured or exhausted from the recent encounter with the mercenaries. Tilias, Gaultherians, and Salix are now filling the spaceship. Quite literally, in fact. Since the ship is rather small, there is no medical bay or even enough room for everyone, so some people are now stacked on top of each other, lacking personal space, breathing thickening air, and suffering in silence.

Bal rudely steps over them, avoiding Salix’ long body and tail, and almost slipping on Gaultherians’ puddle of moisture. He sometimes asks those who don’t look like soldiers if they know where the envoy is. Bals finds the one he’s looking for, at the far end of the ship. The Gaultherian is busy comforting a crying Tilia, just before he notices Bal. They lightly hug him, and whisper a few niceties before standing up. Bal, looking at the envoy, nods at the exit, as they resume the conversation:

The Gaultherian, stupefied, steps back, and looks at Bal from head to talons. Their mushy collar begins to inflate as he clenches his palms. Bal’s feathers rise up as he crosses his arms. He wonders if this puny and moisty official is really capable of anger.

Bal interrupts them with a menacing swing of his left talon. “Well, nice to meet you! My name’s Bal, and if you want my ship you’ll have to pin me to a cliff!”

He abruptly turns around and heads back to the cockpit, leaving the mentally shattered Gaultherian behind. It’s been long since he has spoken to someone else, much less argued with them. His beak is still shaking from the adrenaline rush. As he sits back at the command post, he sinks his face into his palms. Somehow, it does feel good to get emotional after so many years. It feels… honest.

The control panel turns orange, its light illuminating the entire room. Bal slowly lifts his head from his talons and glances over the screens. He has almost reached his destination. As the panel changes its shade from orange to green, the old Tilia initiates the braking sequence. Stars stop flashing by as drawn-out lines around the cockpit and stardust is cleaned from the windows with the ship’s old-fashioned wipers. Bal opens another panel and hovers his hands, claws out, all around over it to adjust the energy fields. He starts peeking around for his merchandise.

Which are nowhere to be seen. He launches an area scan – a flash on the screen, a yellow dot in the darkness. The cargo is right above him, so Bal immediately rotates the ship around.

Just as he glimpses at his three containers, he feels as if his blood freezes right there, in his veins. The cargo is being towed away by another ship! It seems to be engaging the EOC, so Bal makes use of the little time he has to try to contact her before she leaves. An old ship she seems to be indeed – her parts are practically shedding. However, all over her hull, a built-in structure worries Bal. Red-shaded metallic scales, covering the top half… “By all the damn stars,” Bal curses, “it has to be the Zirul Dominion!”. Without hesitation, he sends a message to the other ship:

“Greetings, my Zirul friends. I am the rightful owner of the three containers you have just found. Would you kindly return them to me before leaving this area? Please? I have the necessary paperwork, proving my identity and my ownership of the cargo. If you proceed forward you may be incriminated for piracy.”

He always hated to deal with the Zirul. They are also so full of themselves and too easily offended. It is a very poor combination of personality traits and a pain to interact with. Bal nervously taps one of his arm-rests as he slowly drifts towards the Zirul ship. He eventually receives an answer just before the spacecraft activates its EOC and speeds out, into the void:

Show me chapter IV: Yet another job