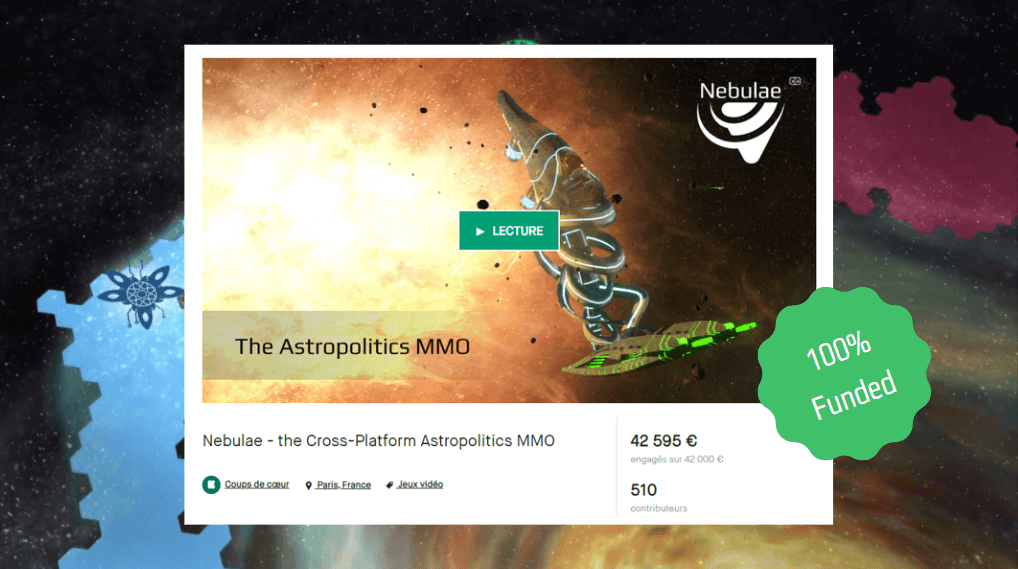 Northern Lights Entertainment has successfully concluded its Nebulae-crowdfunding campaign on Kickstarter on November 30th 2019 with 42 595€ raised and 510 backers!

Thank you all, so very much!

Check out the Kickstarter.

Nebulae is an upcoming massively multiplayer cross-platform strategy game, where players have to protect their nations from a rapidly expanding nebula within a galaxy.

Our Paris-based games studio, has recently ended its crowdfunding for our new cross-platform astropolitics MMO strategy game on Kickstarter. Titled “Nebulae,” the game will be available on both mobile and PC, and is entirely free-to-play.

Nebulae is a massively multiplayer strategy game, where players collectively control nations, coexisting in a galaxy that is threatened by a fast-expanding nebula, which forms the main backdrop of the game. Players would have to combine economic and environmental management, governance, diplomacy and warfare with customizeable 3D spacecraft to ensure the dominance and survival of their nation, as they attempt to withstand the fatal expansion of the nebula.

“We are excited to bring you our dream game project. Nebulae is a state-of-the-art online massive multiplayer strategy game that promises long hours of fun and adventure with your gaming buddies. Our game revolves around a beautiful galaxy that houses many intelligent species, life forms, and 7 spacefaring nations, 3 of which will be playable at launch. Unfortunately, this galaxy is threatened by the expansion of the nebula, which will render entire star systems uninhabitable, resulting in billions of refugees and border clashes between factions. As players, you are the decision-makers within your nations and it’s you who will have to overcome the environmental threat to preserve the galaxy. If you can and want to.” – NLE founders said.

The game is scheduled to have its official launch in 2021. It will be initially launched on mobile and then on PC on a complementary, cross-platform basis.

Upon launch, each nation in the galaxy will have its distinct political structure. In the long-term, all powers might be destroyed, conjoined, or completely replaced with new nations that would be created by the players only.

Gamers, irrespective of device, would play in the same world and enjoy complimentary functionalities in between platforms. The politics and the management part would be the same, regardless of whether you play on a mobile or PC. However, there would be a slight change in terms of combat. PC players will get to participate in larger-scale warfare while mobile players would engage in shorter skirmishes.

“Nebulae is something like a huge ‘all you can eat’ buffet for political experimentation in the context of an MMO. As avid gamers, we do understand what other gamers love the most, and you will get all those ingredients in our game that will keep you hooked onto it for hours. Moreover, as our game will be available on mobile, you can play it on-the-move as well. However, such a high-end game demands a state-of-the-art infrastructure and programming, and thus this Kickstarter campaign. Your generous support will enable us to bring our game to life and ensure a truly exciting experience for you.”

Backers will be rewarded with access to the early Alpha, prior to the launch, other in-game bonuses and game-related merchandise.

You can still show your support : Late Pledge on our website.